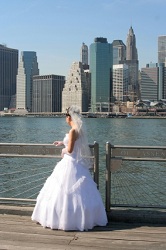 To marry in the State of New York, you must first apply for a marriage license. Marriage licenses must be applied for at a town or city clerk and both parties of the marriage, the bride and groom, must be present when applying for the license. There is a 24 hour waiting period for the license to be issued and the license is valid for 60 days after issued. You are not required to be a resident of the State of New York in order to be married in the state, however you will not be able to obtain a license if the your marriage would be considered void in your home state. The fees for a license are between $35 and $50. No blood tests or medical examinations are required in order to obtain a marriage license.

Applicants under the age of 14 may not be married in the State of New York. Applicants who are 14 or 15 years old must have written consent from both parents and from a justice of the Supreme or Family court in the town or city in which the application is made. For 16 and 17 years olds, only parental consent is required. Applicants over the age of 18 do not require any consent.

It is not required that the bride take the last name of the groom, but either or both may choose a name in which they would like to be referred. This should be decided before the ceremony and recorded on the license.

You may be married by a mayor, a city clerk or deputy clerk of a city with more than 1 million inhabitants, a marriage officer appointed by a town or village, a justice or judge of the court, a member of the clergy or religious society. The officiate of the marriage must report the marriage within 5 weeks of the ceremony to the license issuing office.